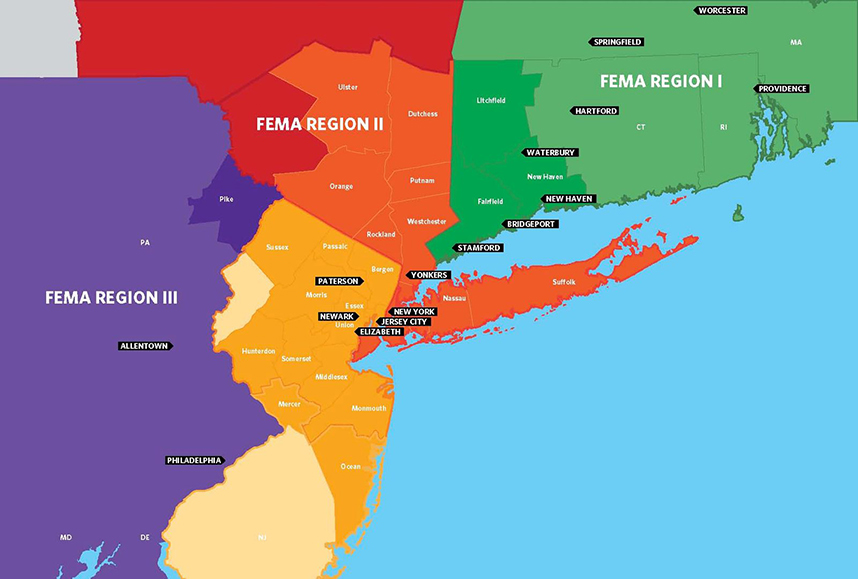 Emergency management functions are organized differently in each state. In addition to governmental stakeholders, each state and local jurisidiction has a number of community and faith-based partners.

Connecticut, while divided into eight geographic counties, has no county government system. The state's Division of Emergency Management and Homeland Security (DEMHS) has divided the state into five regions that cross county lines. Connecticut governmental stakeholders located within the Region include, but are not limited to, the municipal governments in Fairfield, Litchfield and New Haven counties, the county and state level emergency management and homeland security agencies including DEMHS Regions 1, 2 and 5, and the state and local Citizen Corps Councils.

New York State has a total of 62 counties including the five counties (also known as boroughs) of New York City. Each of these counties has its own government. The exception to this is New York City which consolidated the five counties (boroughs) under one city government in 1898. The Region includes eight New York counties and New York City. The New York State Division of Homeland Security and Emergency Services (NYS DHSES), like Connecticut's DEMHS, divides the state into five regions. Region 1 includes Nassau and Suffolk counties and NYC while the remaining six counties are located in NYS OEM's Region 2. New York State stakeholders include, but are not limited to, all of the local jurisdictions located in the eight counties, county and state emergency management agencies including NYS OEM Regions 1 and 2, and the state and local Citizen Corps Councils.

The five boroughs that comprise New York City operate under one city government. The New York City Emergency Management (NYCEM) coordinates emergency management activities in the city. The New York City stakeholders include, but are not limited to, Mayoral Agencies, the Mayor's Office, non-profit and private sector partners and the NYC Citizen Corps Council.

The concept of home rule is important for emergency managers in the NY-NJ-CT-PA Region. Each state has a form of home rule that recognizes the independence of the counties as well as towns, villages and single purpose independent governmental taxing districts. There are differing degrees of home rule, ranging from individual towns and villages having total governmental determination by the residents, to those that rely heavily on county support to maintain public services. Ultimately, the chief elected officials in each one of these political sub-divisions have total control and responsibility for governing within the established boundaries. Responders from outside of the Region should be aware of these additional layers of government and the required coordination and communication between them.